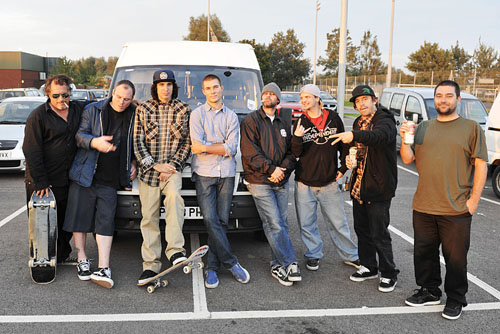 In 2008 the US independent trucks team were touring the states and Europe and luckily for us Jerome Loughran was the UK Indy TM and was living in tropical Newport at the time brought them to the recently built Newport park with US indy riders Steve Olson, Darren Navarette, Jeff Grosso, Peter Hewitt, Alex Olson, Sam Hitz, Stu Graham, Chris Haslam, and the UK indy team, Potter, Marc Churchill, Joe Habgood amongst others (the Americans were not all that impressed by the mellow maverick bowl which after a visit to the states I can fully understand why) between the full snake session, some hammers were put down as the UK team were more used to those mellow un-invertible transitions, Stu Graham and Steve Olson were both charging round the bowl faster than fuck whilst Chris Haslam and the UK team continued to hammer the bowl, with Navarette and others joining in on the baby vert wall with all sort of hands down variations. There was never an official edit from this stop but below there are enough edits to show a lot of what went on from that day,

0
Your bag is empty
Start shopping